How to fix issues with SMI pausing or freezing

Math Inventory has been having some issues with students not being able to complete tests, so I dug into it to see what the problem was. Apparently, SMI requires Flash to be unblocked. What is happening is that after approximately 5 questions, SMI provides audio feedback to the student. This audio is delivered with Flash, but if Flash is blocked, the window just sits there. To fix the issue, the student has to unblock flash.

How to know Flash is unblocked

Once the student logs into SMI, they are greeted with a welcome screen. 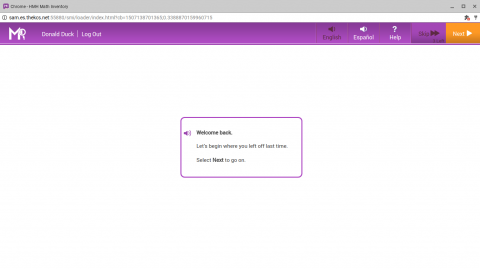 If the student doesn’t hear a woman’s voice welcoming them back, then Flash is blocked and SMI will freeze on the student.

To unblock Flash, click on the puzzle piece in the toolbar in the upper right corner:

Click on Run all plugins this time, and the student will now hear the woman’s voice. From this point forward, the student won’t have any problems with SMI pausing or freezing.